Bridge 37 Up Side Slip

Bridge 37 Up Side Slip

Anyone familiar with GWSR can not help but have seen all publicity about the appeal for funds to get us over the crisis caused by the landslip at Gotherington and the coronavirus (COVID-19) Pandemic. Contracts had been let and work started before the full impact of COVID-19 was realised. The closure of all non-essential businesses has led to the Railway shutting down and income drying up. This dire situation has forced us to appeal for your help. The appeal has been replayed at the bottom of this blog.

Work has been going on for some time to repair the slip to the north of Bridge 37 at Gotherington. The embankment on the up (Malvern) side started to slip in November 2019 and by the time that repair works has started the face extended to 3.4m deep.

The full story of the slip in all its gory detail can be found here:

Work has progressed a bit since the story went to press. The line of 10M piles along the crest has grown, they are all in, but still need to be hammered down level. After that the steelwork will be added that will allow the tops of the piles to be bolted to the middle row of soil nails in the face. Then the void between the trackbed and the piles will be backfilled and the slope landscaped.


You can help this cause by donating to us either:
By Bank Transfer to Sort Code 30-90-89 Account 47638368
using the reference ‘LANDSLIP’ plus your membership number (if applicable)
or
by sending your cheque payable to GWRT to The Chairman, GWRT, Churchward House, Winchcombe Railway Station, Winchcombe, Glos GL54 5LD.

In either case, if you are a UK taxpayer and feel able to download, complete, scan and e-mail our Gift Aid form to trust.chairman@gwsr.com
we will be able to claim 25% Gift Aid. Alternatively, you can print, complete and return it to the above address.

As many of you may recall, in October and November 2018 we had a team of specialist Engineers carry out a detailed examination of this 15-arch structure, which involved some abseiling work.

The approved 228 -page report arrived on 12.02.2019. Generally speaking, the structure is in fair condition, but, as with most brick structures about 110 years old, there are a large number of defects and minor faults. These include – cracks, damp patches, hollow sounding areas, frost damaged brickwork, vast areas needing pointing and water coming through the brickwork, especially above the piers.

Water penetration of the brickwork, due to defective drainage, is believed to be behind many of these problems. 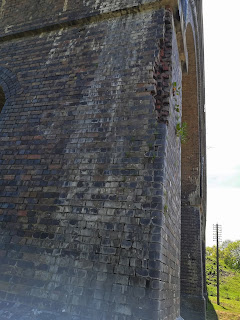 Then in May 2019, the user of the field who grazed horses reported that some brickwork had fallen off the corner of one pier!

A plan was put together to undertake some brick repairs and the investigation of the water penetration problems. Quotations were obtained, but the cheapest was more than double our budget for the work. In addition, two contractors who had expressed interest declined to quote. With winter rapidly approaching, and when lime mortar work is not viable, we decided that the most important thing was to sort out the drainage issues. A more comprehensive scheme was put together, without the brick repairs, which were non-critical.

Eventually, with Christmas looming, we appointed Walsh Construction, who were already busy with scour repair works on the River Isbourne.

The first thing to be done was to remove all rails and sleepers from the 192.5m long structure. Our P-way dept. agreed to do this starting on Saturday 4th Jan, but fortunately were able to start on the Friday, instead. In a massive effort they lifted the lot and stacked half at each end of the structure.

The contractor started on Monday 6th Jan, and then had a completely clear trackbed to work on. The drainage of this viaduct comprises waterproofed arch top slopes leading to a brick chamber located above each of the 14 piers. Each chamber has a steel outlet pipe, from the bottom of the chamber, then passing through the soffit of the arch brickwork. Water is supposed to get into the chamber through a hole app. 4” x 3” in each brick face (4 holes per chamber).

As you might imagine most of the holes were blocked with a build up of muck and sludge from years of atmospheric debris supplemented by stuff discharged by the trains passing over the structure! None of the pits had proper lids on them; they were either some old concrete sleepers, or some thick stone slabs. New reinforced concrete lids have been cast, on site, each with an access pipe, through which a CCTV camera can be inserted to do regular checks, in the future.

The contract involved digging out an area around each chamber for the full 7.5m width of the structure x app 4m in length. The fill revealed was primarily ash, with accumulated muck which was reducing the drainage capability considerably. Half of this fill will be re-used by our Drainage team on various future projects and the rest will go away to tip. Having exposed the bitumen waterproofing it was clear that this was breaking down and allowing water through in many places. A much larger job to deal with that and completely waterproof the entire structure will be required in the future. The object of the current work is to replace the current poor quality fill around the chambers with free draining stone so that water disposal will be much quicker, and it will not have time to soak into the brickwork.

The viaduct does not have a very good access, so all excavated materials going out and new stone coming in has to go via Stanton yard about 1/2mile north and be transported by dumper.

Excavation started at the Toddington end and progressed northwards. Once the first 7 pits had been dug and the drain holes in the pit walls cleaned out a layer of plastic sheeting was laid in. The hole was then filled with new free draining stone. On top of that new ballast was placed, ready for the sleepers to be dropped straight on top.

In this view of excavated pit 14 the mainly ash infill is clearly visible at the top.
The first 7 pits were completed on Friday 24th Jan, and, with the haul distance getting shorter all of the time, the remaining 7 will almost be completed by p.m. on 31st Jan. Track re-laying, starting at the Toddington end, should commence on Saturday 1st Feb.

Just a quickie to say that posts on the Civil Engineering blog may be absent, or at least intermittent for a while, as the principal contributor, Alastair, has suffered a short illness and needs to recover, and then get his driving licence back.

We understand Alastair is recovering well, so don't worry, but blog postings, especially about the viaduct work, will be affected.

In the meantime Stu from the drainage gang will try to cover on the drainage blog, or if convenient, he may even send pictures and a short text to yours truly, who will do the post. We'll see what works best.

Bear with us! And thanks for your patience.

For a number of years, GWSR’s civil engineering department has been watching the River Isbourne as it passes under the railway to the east of Winchcombe Station. Over the years, it has meandered on either side of the large culvert through the embankment.  Although we call this a culvert, technically it is a bridge being a brick arch of 16ft span, 13ft high and 128ft long.
Upstream on the south side, it has been cutting into the embankment to the west of the culvert whereas downstream the bend of the river has been getting more acute and threatening our neighbour’s garden. In addition, the river has narrowed downstream as it has deposited silt on both sides.

Earlier this year, David Symonds Associates were commissioned to prepare a report on the state of the river and its implications for the railway. The first part of this was a detailed survey on both sides of the railway including the depth of the water. This revealed that on the upstream side, the river had eroded so much ground that the stability of the carriage siding above was in doubt. In addition the neighbour downstream was getting increasingly anxious about losing his garden. Therefore David Symonds Associates were commissioned to prepare a scheme to safeguard the railway and our neighbours.

In an ideal world, the river would enter the culvert on a straight line and leave it on a straight line avoiding any bends that might lead to erosion. However that was not how the river was when the railway was built and it is not possible for such a course today without destroying our neighbour’s garden and possibly the back of his house! Accordingly the adopted plan is to return the river to its original course and strengthen the embankments to prevent meandering in the future. Designing such a scheme requires the cooperation and approval of a number of parties including Tewkesbury Borough Council as the river authority for the Isbourne. A wildlife survey was done which revealed that there were no bats in the culvert and whilst there might be crayfish in the river, this would not be an issue and the wildlife consultant would visit during the works to check. Unfortunately Himalayan Balsam was present on both sides of the railway. This is an invasive species and there are regulations for removing it which was done as an enabling works package by the contractor. Negotiations were also required with our neighbour, Winchcombe Reclamation, to the south east of the site to allow the contractor access. They have very kindly given permission for this access. After putting the scheme out to tender, Walsh Construction were awarded the contract and a start date agreed.

All this process takes time with the result that instead of starting in late summer, it was late October before all the permissions and contracts were in place. The approved scheme utilises gabion baskets and mattresses, which are wire cages filled with pieces of hard rock. A membrane is placed behind and under the gabions to stop water eroding the soil underneath. Above the gabions the existing soil banks are being reinforced with a mesh membrane. Work started well with two large steel pipes being placed in the river on the downstream side to contain most of the flow and leave the sides as reasonably still water.

This worked well for a time and then it rained. And rained. The river flow became too much for the flumes and Walsh went to Plan B: using sheet piles to isolate a section of the bank. The work resumed but then it really rained and the site was overwhelmed.

At this stage, there was nothing to do but wait until the river level dropped and then seize each opportunity.

Transferring the stone for the gabions became a game of pass the parcel with one excavator picking up the stone from the stockpile and handing it to the other excavator to place in the gabions. Watching from the top it was like a delicate ballet exercise! Perseverance paid off and the NE corner was completed.

Operations then moved to the NW side and the sheet piles were installed for this phase. This time excavation and construction was easier as there was no river in the way. Also the weather was a little kinder in that the rainfall was not as intense and the river level fell fairly quickly after each storm. By Christmas, the NW side was nearing completion as the site was secured for the holiday and the contractors took take a well-earned break after an extremely wet and muddy six weeks. Hopefully the weather will be better in the New Year